First off I am so excited that after 6 trips to the post office and having someone call the automated post office phone system 5 times, that I finally have the package my mom sent me! Made my day! I also got a postcard and a letter today! Gosh I feel so loved! 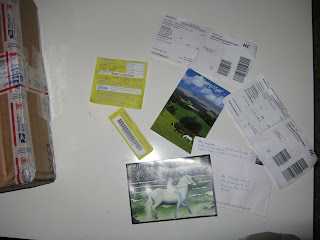 A picture of the card and post card, as well as the slips delivered before the package without pickup instructions. 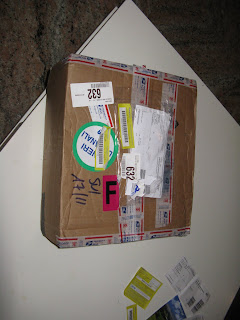 The package, filled with lots of thoughtful goodies! 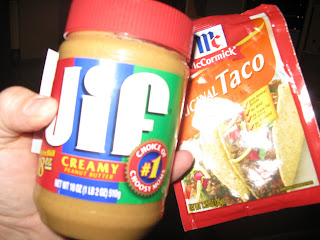 Choosy mom's choose Jif! Plus Taco seasoning, yumm!!!  Thank you momma so much!

We had our second English class today at the Facoltà di Ingegneria today and had 6 students show up. So, I will update you as to the progress of the class. The students are coming because at this faculty in the spring there will be an English test most of the students will be required to take, so I am going to help them with some test prep.

Last week when we met I had prepared a lesson focusing on a major English test in Italy that I thought that they might be taking, but it was the wrong one. The 7 students that showed up last week all said they were spoke, "Bruto Italiano." They lied, they spoke very good English. We did lots of grammar practice and it was ok. Anyhow, this week I knew in advance what test they would be taking as well as what they wanted to do with our time together. So, this week we focused on the spoken part of the test.
I prepared models of the four different parts and their components. We had a ton of fun. The first part of the test is an interview of the tester about their hometowns, family, and other things. I liked this part because I was able to hear a little from each person about who they are and where they are from. In the second part of the test they have to compare two pictures. The funniest thing is one set was to compare a dog to a chipmunk. It was so funny because none of the Italians had seen a picture of one before. After Kelly and I began to explain what it was one of the girls shouted, “They dance and sing like, umm” and I replied, “Alvin?” She said yes and they are started talking about Alvin and the chipmunks. After a few minutes of laughter we moved on to the third part in which the test takers are given a task they have to plan in pairs. It was fun to hear them interact with one another. The last part of the spoken test is for the students to discuss in a group of three their opinions about a question or topic.
This is where our time together got interesting. One of the questions I asked focused on politics in Italy. Anyhow they were all a little eager to discuss and Kelly got a lot of insight. She studied Italian politics as a part of her coursework in college. After our two hours together was over, I was a little sad that I would have to wait till next week for us to talk again!

• That the English club on Tuesday turns into a great way to foster relationships with the Italians. Praise that is on the campus and that we kind of have a room.

• Pray for the discussion group about worldviews of Christianity and other religions turns into a fruitful time with believers and non-believers here in Bologna. On a side note, it will take place in a McDonalds.

• Pray for the small group of girls who want to study the Bible with Annet in Greek and Latin. Praise that we have someone on our team who can do that!

• Pray for the team as we each branch out into personal ministry interest times on campus. Pray that we will each find something that will help develop relationships with Italians that will lead to sharing of the gospel.

• Pray for some special relationships that our Cody, Jesse, and Tricia have with people in the community and praise that some of them are asking the staff about God, the church, and the Bible!

As always, I want to continue to pray for supporters back home. Feel free to email me at clearblue06@live.com and I will make sure to diligently talk to God about what you share!
Agape in Christ,

Crystal Waters
I am just a believer working on my walk with the Lord and trying to honor Him with my life!